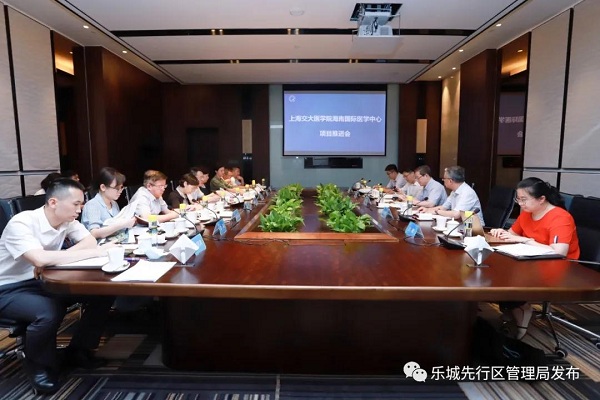 A work meeting to discuss moving forward with the SJTU School of Medicine's international school of medicine project in Hainan is held in Haikou on July 15.

A work meeting to move forward with the Shanghai Jiao Tong University (SJTU) School of Medicine's international medical center project in Hainan was held in Haikou, capital of Hainan province on July 15.

The medical center, to be built under the cooperation of SJTU's School of Medicine and the Hainan provincial government, which is located in the Hainan Boao Lecheng International Medical Tourism Pilot Zone, is expected to promote the integrated development of enterprises, universities, and research institutes in Lecheng. It will also help upgrade the cultivation quality of medical talents in Hainan.

Gu Gang, director of the Hainan Boao Lecheng International Medical Tourism Pilot Zone Administration, briefed attendees on the current situation of the project during the meeting.

Consensus was achieved at the meeting between both sides in areas, such as making full use of preferential policies for the Hainan Free Trade Port and opening up communications.