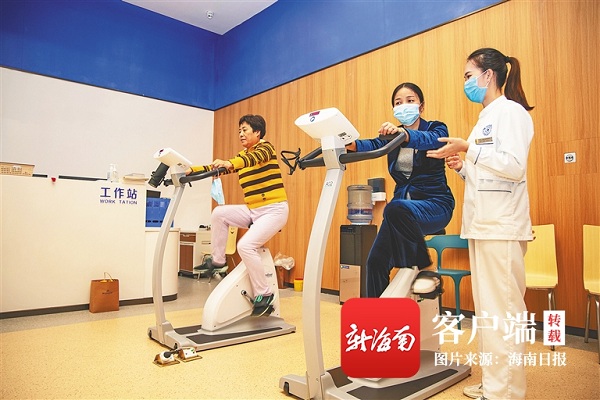 A patient uses the rehabilitation equipment at a hospital in Boao Hope City. [Photo/Hainan Daily]

The expo will show that the medical tourism pilot zone, which is also known as Boao Hope City, is gathering pace in terms of becoming more international and competitive in luring more medical spending that was originally planned to be made overseas.

Many of the world's top 30 pharmaceutical and medical apparatus companies will participate in this expo. Some will bring their most advanced and cutting-edge products and technologies, including 500 kinds of medical products and devices that have been listed overseas but yet to become available in China.

Medical experts and patients in China can learn about the most advanced technologies and equipment in the world without going abroad through the expo, which will open for a long time to better benefit Chinese people.

To date, Boao Hope City has established partnerships with four-fifths of the world's top 30 pharmaceutical and medical device companies. There are 135 innovative pharmaceutical devices that have not been listed on the domestic market but are available in the park, with many of them being released for the first time.

Boao Hope City plans to achieve breakthroughs in the construction of a characteristic advanced clinical medicine center and a cutting-edge medical technology R&D and transformation base by 2025. It is also keeping abreast with global standards in medical technologies, apparatus, and innovative drugs.

Gu added that next, the zone will expand its coverage of special drug insurance to attract patients in need from the Belt and Road Initiative countries for treatment.