Four robot-assisted total knee arthroplasty (TKA) surgeries, the first of their kind in China, were completed by staff at the National Clinical Research Center for Orthopedics, Sports Medicine & Rehabilitation at the Boao Super Hospital in the Hainan Boao Lecheng International Medical Tourism Pilot Zone in Qionghai, Hainan province, on Dec 26.

This goal has been backed by cooperation between the pilot zone's administration, the National Clinical Research Center for Orthopedics, Sports Medicine & Rehabilitation, Shulan Health, and DePuySynthes, who co-built a smart orthopedic research and training center there on Dec 18. The national clinical research center also built an innovative experiment base at the pilot zone. These developments will help the zone bring in more world-leading medical technologies, provide high-quality medical service to more Chinese patients, and promote the development of orthopedics in China.

The surgeries in December saw the national clinical research center make intelligent surgery a reality in Lecheng. Compared to traditional knee replacement surgery, the implantation of an advanced cementless knee joint prosthesis requires higher-level surgical skills - because even a millimeter-level error will seriously affect the service life of the prosthesis, according to some experts.

Even an experienced surgeon can only achieve 85 percent accuracy when doing a traditional joint replacement surgery. Therefore, the intelligent robot used for assistance in the surgeries is a revolutionary technology for joint surgery and provides a new solution for this difficulty.

Experts at the national research center said that the Mako robot can help complete the precise implantation of cementless prosthesis. Based on the robot's smart planning systems, the type of prosthesis needed in the surgery and the location and angle where it is placed can be precisely planned in advance. During the surgery, the sub-millimeter-level bone cutting operation can be realized via the use of a robotic arm. More importantly, the robot will stop the operation instantly if the surgeon deviates from the planned route, which significantly improves the safety of the surgery. To ensure the success of such high-level surgeries, the center has conducted hundreds of medical trials.

The Mako robot, developed by Mako Surgical, can perform individualized modeling, measurement and design for patients before the surgery, which will reduce the occurrence rate of problems such as the different length of two legs, dislocation of joints and loosening of the prosthesis after the surgery. It will also help accelerate the patients' recovery.

Apart from the Mako robot, the cementless knee joint prosthesis is also an important weapon for osteoarthritis treatment. The prosthesis and the bone are integrated through precise mechanical gomphosis. In a sense, the prosthesis is more like an organ of the body than an artificial part. 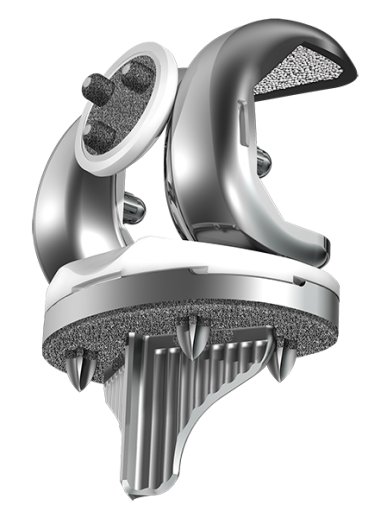 Another advanced technology used in the surgery is a cementless total knee joint replacement system called Triathlon Tritanium, developed by the Stryker Corporation. Based on 15 years of successful results of Triathlon products, Tritanium uses brand new 3D printing technology to make the trabecular structure of the pure titanium bone similar to that of the cancellous bone of the human body, with an average pore size of 527 um. This makes the in-growth of the bone cells, vascularization, and steady combination with the bone possible. The friction coefficient of the prosthesis reaches up to 1.02, which ensures its steadiness.

There are four fastening nails on the dorsal part of the Tritaniumtibial plateau. The place and shape of the nails follow the design of SOMA, and the nails are uniformly distributed at the place with the largest amount of sclerotin - based on bone mineral density evaluation of different-sized tibial plateaus - so as to ensure the long-term fixed effect of the prosthesis.

The space suit-like surgical gowns the surgeons wore during the surgeries this time were also different from the traditional surgical gowns. The gowns, which are composed of a built-in helmet, bacteria-free mask, bacteria-free gown cover and unique air supply system, can reduce the possible infection rate to almost zero during the surgery, and prevent the patient from being infected with bacteria. 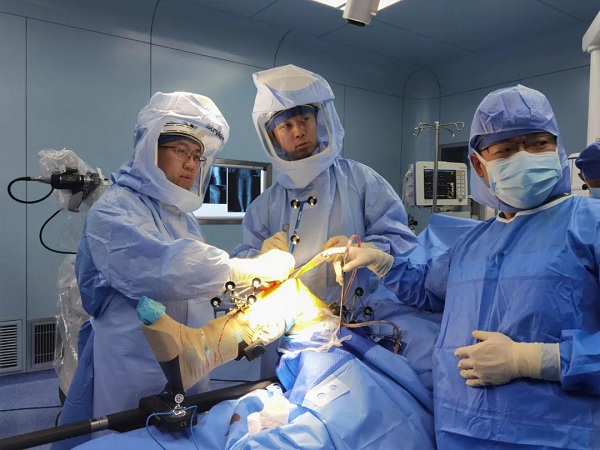 Before the four cutting-edge surgeries, the implantation of the DePuySynthes-developed femoral stem prosthesis Actis, the first clinical application of this product in China, was also successfully completed at the pilot zone on Dec 18. This success marks a new breakthrough made by the pilot zone in the field of orthopedics.

The patient in this case, 66 years old, had suffered from rheumatoid arthritis for over 50 years and had taken hormones and immunosuppressants for a year, resulting in a series of complications such as osteonecrosis of the femoral head and osteoporosis. Before this surgery, the patient had undergone three orthopedic operations. Those operations and the other complications had led to a difference of more than 1 centimeter in the length of the patient's legs.

Chai Wei, professor of orthopedics at the General Hospital of the Peoples Liberation Army who conducted the surgery, said that the patient was weak and has diseases such as high blood pressure and emphysema, which are challenges both for the surgery and postoperative rehabilitation. Chai's team used artificial intelligence technology to perform a risk investigation and created an elaborate rehabilitation plan. They precisely measured the type of the prosthesis, the place to cut the bone, and the length of patent's legs to ensure the success of the operation.

Chai and his team successfully conducted the total hip arthroplasty in less than 45 minutes, with a 7 cm incision and less than 100 ml of bleeding. The patient could stand and walk the first day after the surgery. He said that he feels good, because the surgery was not painful at all, the incision was small and he does not walk with a limp any more.

Chai explained that the success was a result of cooperation between many parties, including the pilot zone that provides excellent operating rooms and well-equipped facilities.

Artificial joint replacement surgery has the highest requirements of all kinds of surgeries in terms of the condition of the operating room and the skills of surgeons. The success of the surgery marks a significant improvement in the pilot zone's surgical infrastructure.

Gu Gang, Party secretary and director of the pilot zone's administration, said that the zone is committed to bringing in cutting-edge technology, drugs and medical equipment in order to provide new and high-quality medical solutions to domestic patients and promote technological improvements in the domestic medical industry. So far, the zone has brought in nearly 130 innovative drugs and items of medical equipment, helping treat more and more diseases. The robot-assisted surgery will further improve the reliability of the zone's medical technology.

Gu also said that the zone - China's only medical special area - will seek cooperation with more multinational healthcare enterprises and develop itself into a base of medical innovation and a high-quality medical industry hub.